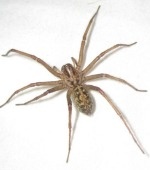 Choose a pest below to learn more about Pest Control in Riverton
"First of all, their customer service is hands down top-notch. Heather is amazing. She's highly respectful, very good at what she does, and always makes sure you're taken care of. I have had them spray for us every 3 months for the last 4 years, and never once have they failed to provide the service promised to us."
--Shelbi H.